Nashe Maalo (“Our Neighbourhood”) is a TV show for children, ages 7 to 12, that combines entertainment with education. Structured as an intended-outcomes programme, the series has 3 primary objectives: to model and promote intercultural understanding amongst members of Macedonia’s ethnically diverse population; to model and teach conflict prevention through greater cultural awareness; and to model and teach age-appropriate conflict resolution skills. The show is based in the residential reality of many towns in Macedonia, where apartment buildings are populated by families from various ethnic and linguistic backgrounds. The series has a creative story line that follows the interconnected lives of a close-knit group of young people from four different ethnic groups – Albanian, Macedonian, Roma, and Turkish–and shows how they are able to form friendships and to cooperate, despite the prejudices and peer pressure that surround them. All four languages are used in the broadcasts – highly unusual in this part of the world. The glue that holds this group together is the secret knowledge that the apartment building in which most of them live is alive. Her name is Karmen, and she is sassy, witty, and wise. A guide and mentor, she has the magic power to transport the children in time and space to see situations through their neighbours’ eyes. 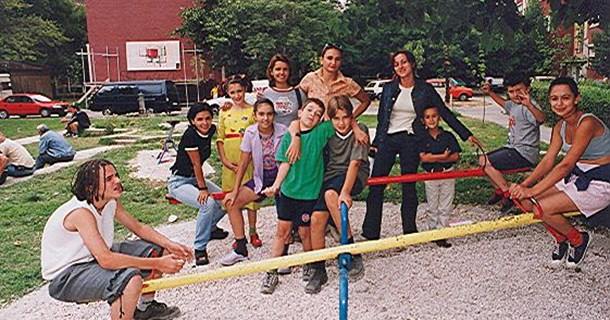 The series has quickly become one of the most widely viewed programs in the country. Nashe Maalo was broadcast on the Macedonian National Television (MTV), on its Macedonian and Albanian channels, thereby reaching 95 percent of all households. Initial surveys indicate that an astounding 75 percent of children, of all ethnic groups in the country, regularly watch the show. Nashe Maalo is the first television program in Macedonia in which kids from various ethnic communities are portrayed living and playing together – usually harmoniously. Helping children from all ethnic backgrounds to understand and value their differences has been described as, “Nashe Maalo logic.”

Over 100 Macedonian professionals joined together to produce 41 episodes in the scope of Nashe Maalo. The last season of Nashe Maalo was broadcasted in late 2003, however re-runs continued in 2004 on several TV stations in Macedonia. The series has drawn praise from all levels of Macedonian society, including the late Macedonian President Boris Trajkovski, who expressed the hope that “Nashe Maalo will become an integral part of kids’ everyday lives, not only in this, but also in future generations.” Nashe Maalo was honored with a Gabriel Award from the National Catholic Association for Communicators, the Axiem Award in the US, the Buba Mara Award in Macedonia, and was a finalist for the Prix Jeunesse, the world’s most prestigious children’s television award.