Mozaik is a unique model of bilingual and multicultural pre-schooling in public kindergartens, bringing together children from Albanian, Turkish, Serbian and ethnic Macedonian communities. Education in Macedonia is highly segregated based on ethno-linguistic criteria. Because children from the country’s various communities commonly attend separate classrooms, from kindergarten through high school – and even at university – most children rarely come into contact with peers from other communities. Mozaik preschool groups are the only example in Macedonia of bi-lingual, multicultural education at any level. 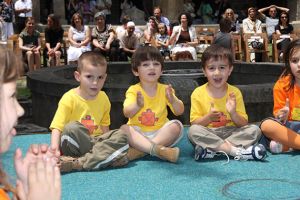 The Mozaik initiative began in 1998 with implementation in public kindergartens. Mozaik teachers were carefully selected and provided with an eight-month intensive teacher’s training and host kindergartens were furnished with all necessary materials and equipment.

This project demonstrates a positive model of multi-ethnic/bilingual education for education authorities, communities, parents and children throughout Macedonia. Targeting the kindergarten level is a strategic approach given the structural and political barriers within the Macedonian education system.

Over the past twelve years, more than 850 children has passed through the Mozaik kindergartens in nine municipalities. It is SFCG’s longest continually-funded program. Teaching young children to be free of prejudice has also influenced kindergarten staff, their family members and education authorities, reaching over 2000 beneficiaries and engendering wider changes in attitudes across society.