Initiated in January 2011, Sharing a Common Culture: Balkan Theatre Networks for EU Integration, is a regional project that involves youth from Serbia, Bosnia and Herzegovina and Macedonia in the creation of plays that highlight their common European culture while promoting cultural and ethnic diversity.

Partnering with the Centre fo Drama Education in Bosnia and Herzegovina and the Student Cultural Center in Serbia, the Common Ground Theatre promotes tolerance by debunking stereotypes. 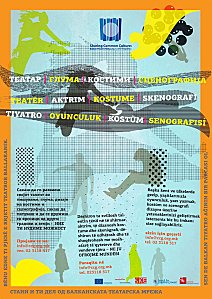 The overall goal of the action is to harness the power of culture to reinforce a participative democracy based on EU common values by enhancing regional cooperation and good neighbourly relations, while respecting and promoting national cultural heritage.

The specific objectives are:

The expected results of the action are:

Six new theatre plays – two per country – were produced and performed by the youth themselves promoting and raising issues amongst youth participants and audiences about diversity, intercultural dialogue, social and civic responsibility and regional cooperation based on common cultural values.

As a result of their participation in the project, the young people learnt the necessary skills to playwriting, set and costume design and acting. Some of them were trained to lead the facilitated discussions with the audience. At the same time, this learning process enabled the young people to develop their capacity in teamwork, communication, presentation and organization skills.

The theatre plays were touring locally in the partner-countries. The audiences participated in discussions following each performance providing space for the audience in close interaction with their peers on stage to comment, to ask questions and to explain the feelings they experienced during the performance.

The dramas were also presented at the regional level, providing excellent opportunity for youth who participated in the project to learn more about what peers from other countries did, what were the issues and topics of their concerns. This enabled youth to indentify the differences and the commonalities across the region. It was also a platform for youth to meet, interact, share experiences and get to know each other and each others’ culture better. The action in the dramas and the characters they represented gave flavors, scents and faces to the “abstract” notions youth had about their neighbors from the region.

This project offered a platform for youth and adults to network and contribute towards promotion of local and national culture traditions. Moreover, working together on drama production on local and regional level strengthened the links between diverse youth at a time when mutual understanding is most needed and in a context where inter-cultural exchange can make a critical difference in building more tolerant and open societies. In addition, it created new partnerships between youth and cultural organisations in the three Balkan countries. Moreover, through the regional meetings with partners and exchange of the youth theatre performances, the Balkan Theater Project has significantly contributed to promotion of the historic European values of coexistence, reconciliation, inter-cultural tolerance and collaboration.

In Kragujevac a group of 15 youth developed a drama called “Whoever I am – I am a Turtle” which tackles the burden imposed on youth by their surroundings and also by themselves, from the perspective of a group of several typical high school students. Each member of the group is labeled by the rest, and they all feel like they should not show their true self in order to be accepted and respected by the others. Still, each one of them is fighting to show that he/she is not what the others think and is trying in his/hers own way to convey the message of the drama – I have the right to be myself!

In Struga around 25 multiethnic youth from the city and the surrounding villages participated in the project. For this group of youth it was the first time to be involved as direct participants in any segment of theatre production. They were trained in playwrighting, costume and set design and acting and after 3 months of work they developed the drama called “Timeline”.

It is a dynamic drama portraying the small town of Struga in the year 2025 and today. The destinies of three families from different ethnic and social background are intertwined, the traditions and stereotypes which are deeply rooted into the people are exposed, no matter if they come from the village or from the city. The young actors call up upon the audience with the message “If you want to change the world – start from yourself!”

Premier performance of the “Timeline” happened in Struga, on 4 June at 17:00 in the hall of the Cultural Center.

The theatre play “Bridges” is a product of continuous work during several months with secondary school youth from Nish, who were involved in the playwright process, and later in the other stages of drama design, such as acting, costume and set design.

The play is inspired and is portraying in a dynamic and humoristic manner the everyday life of a group of secondary school youth, showing their reflections on discrimination, differences and intolerance. The story follows a Roma young man and the challenges he faces, including relationships with his peers, and the prejudices and discrimination that sorrund him. The drama is presenting a contemporary image of the life of the youth today. In a search for a common niche, linkage and empowerment, the youth finds a “bridge” which will create bonds between them for the life they will be living in the future.
The storyline for the play has emerged from the stories and experiences of the participating youth.

As part of the Balkan Theatre Networks project, a group of young actors performed the premiere of theatre play “From Vienna with Love” at the theater in Kumanovo, on 11 July 2012.

The drama is written and designed by a multiethnic group of youth from Kumanovo under the professional leadership of the Youth Theatre ART A in collaboration with the Cultural Center in Kumanovo.
The story shows the obstacles a group of men from Kumanovo are facing during connecting in Vienna to their return flight from Kabul. In the famous Balkan restaurant in Vienna, some of them find love, some of them fulfill their dreams, and all of them are bound by friendship and trust in a brighter future.

In Bugojno, a group of 15 youth started to work on the famous play “Spring awakening” written by the German playwright Frank Wedekind in 1891 godine. They decided to take some ideas from the original play, but to adapt them to present time. The title of the famous play was kept and a parallel line was drawn between today and something which was happening 120 years ago, showing that very few things have changed in between. Yes, now we have electricity, phone, internet, airplanes, rock’n roll, cell phones, the majority of people have right to vote… but we did not get very far in the liberty of speech and our attitudes towards the others and towards the diversities.

In Mostar, the 15 youth developed the theatre play the “Olive tree”, which in a very simple and clear way portrays the division of people which happens as a result of their following of harmful politics that aim to spread irrational hatred against the “other”. Although the young people in this play are talking primarily about the division of their birth town of Mostar, still what the audience can see on stage is something universal, something which identifies politics anywhere on Earth, if that kind of politics is aimed to divide and not to reconcile. After each performance of the theatre play, the youth from Mostar started a tradition to plant an olive tree as a message of peace and tolerance.